year by year analysis
If the account is "never really active" - eg zero tweets etc, it's not considered alive (this is 57% of all non-deleted accounts) 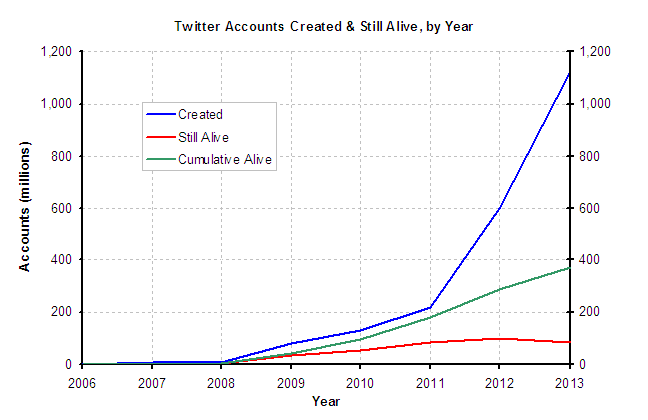 notes
methodology
assumptions
who am I?
I'm Si Dawson. I ran Twit Cleaner from 2009 until 2013.

Twit Cleaner was a behavioural categorisation engine - it identified different types of account behaviour and simplified unfollowing. Put another way, it was an asshole-detector (in all their delightful variations) for Twitter.

This means I've spent a LOT of time getting data out of Twitter and analysing the hell out of it. Eg, over that time I found and reported half a million spam accounts to Twitter - but really I did that just for the fun of it.

(I've also spent 30 years in tech, 15 or so in finance, with time as a quantitative analyst, and done a ton of artificial intelligence development. A longer bio is here.)

Frankly, I love Twitter. I've met so many incredible people through it.

However, in the last few years Twitter has focused on monetisation at the expense of their users and their external developers (dozens of others have been affected, not just myself). Which means ultimately, Twitter the community has suffered enormously. Prioritising money over users/product/experience is bad enough, but developers are what helped make Twitter great.

This kind of attitude is damaging to the long term viability of the company, but makes perfect sense if you're just trying to ramp up the numbers ahead of an IPO

Personally, I'm done with developing for Twitter, but what I'm primarily concerned about is less informed investors getting fleeced.

If you did buy in after the IPO? Good luck. I hope you get out before it costs you too much.